History of Mart Veterinary Clinic (since 1978)

Mart Veterinary Clinic was first opened for business on January 1, 1978 in Dr. Range’s home in Mart. Within a few months the clinic was moved to 106 North Front Street in Mart. The front office was remodeled and a barn for working on large animals was added along with an outdoor kennel.

After many years of growth and expansion, a property across Front street came available and was purchased in 2003. Plans were made to build a new, much larger state of the art facility which would face Highway 164 (Texas Avenue). Plans were drawn, contracts let, and construction began in February 2004 with the present facility completed for move in on February 5, 2005.

The new building consists of the following: 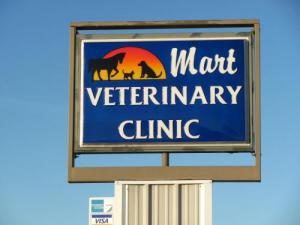