Be aware that as the fall approaches, mice and rats migrate from the fields and yards to homes and barns. As a result rodenticides are used commonly to control this problem. On Friday, October 18, 2013, Dr. Range and the staff saw two canine patients that were exposed to anticoagulant type rodenticide and had to be treated with Vitamin K for extended periods of time. Another dog was seen in late September with the same problem.

October 18, 2013– A kitten about 8-10 weeks old was rescued from traffic in Waco. The rescuer was bitten by the kitten on the hand. The kitten was taken to the Waco Animal Shelter, euthanized due to not being able to use its rear legs, and examined in the Austin laboratory for rabies which subsequently came back positive for the skunk strain of rabies. This scenario plays out fairly regularly in central Texas where skunks and kittens associate with each other. 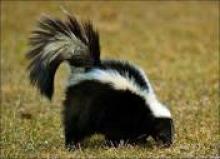 Besides the skunk variant of rabies, bat strain is the other predominant strain of rabies in the Heart of Texas region.

December 1, 2013– Another confirmed case of rabies was found in a skunk in inner city Bellmead. No known human or animal contacts were made with this case.